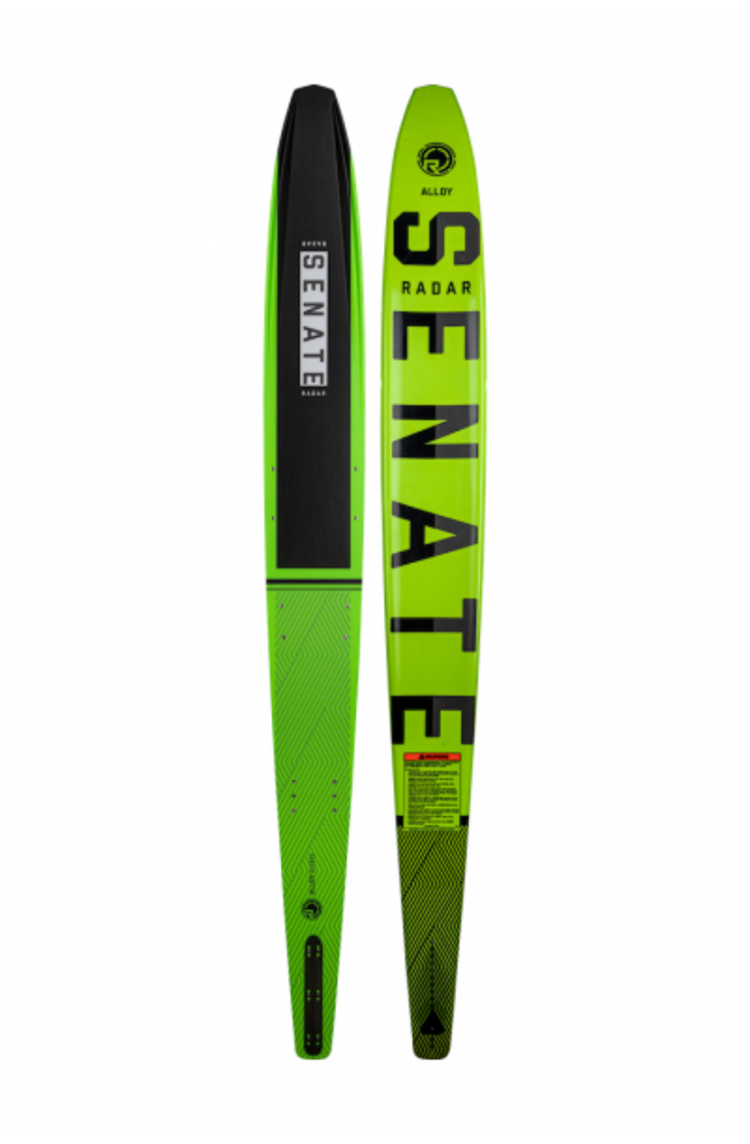 Shape
The wide spot on the ski has moved forward and width has been added from the middle of the ski through the tip. This gives the ski a more tip to tail taper and more support through the front part of the ski. The increase in taper presents the ski with a slightly more tip-up riding attitude and allows the ski to pull through the turn in a more connected, powerful way. The result is less body movement needed to get tight radius turns. The new ski also has slightly less volume in the tail. By reducing this surface area, the tail of the ski is able to smear outward while also staying planted in the water. Ultimately, the updates in shape help it to ride much closer to the ideal line for any given speed and rope length.

Rocker
The tip rocker on the new Senate starts just after the wide spot. This relieves tip pressure and increases forgiveness, allowing a skier to have a bigger platform to stand on coming into the turn. This also helps keep the ski keep moving outbound in the transition and makes the ski incredibly more predictable in the turns it creates. Moving back from the wide spot, the rocker lines are all new. These new lines create a ski with increased tail rocker which softens the way the ski rotates or carves through the turn. The result is a feeling of increased angle from a wider place with an instant acceleration.

Concave
The additional concave depth running throughout the bottom of the ski is one of the most noticeable differences in this new shape. This channels more water directionally from tip to tail, resulting in significantly more side-to-side drive and holding power. More drive and hold allow a skier to be faster as they near centerline which results in a more up-course path. Another result from an increased concave is increased pressure on the bevels, allowing the ski to feel extremely connected to the water. This gives a skier the freedom to control the path of the ski with more ease.

Bevels
The front of the ski carries a sharper, more angular bevel design to harness the increased water flow from the new concave design. This gives the skier more ability to feel how the water interacts with the tip of the ski to create sharper, more predictable turns. In the tail of the ski, the bevel is softened, allowing the water to wrap around the bevel easier. The tip of the ski pulls harder through the turn while at the same time, the tail is able to smear while staying planted in the water. This feathered approach makes the turns feel much more natural and less forced.

Thickness
Sidewall height carries constant to provide balance for the increased lift created by adding width. In an effort to keep the ski nimble, sidewall thickness is reduced to produce the connected, tight turning radius of the ski.

Edge Angle
At two tenths of an inch wider than the Vapor, the width of the Senate allows the ski to roll on edge at a moderate level. This width allows a skier to progress with ease as they instantly feel the balance and control of the bigger riding platform.