In stock
•••••
Article code 21183278
Never been on a board before? Just starting out? The Liquid Force LTD Index Wakeboard Bindings were made for you! 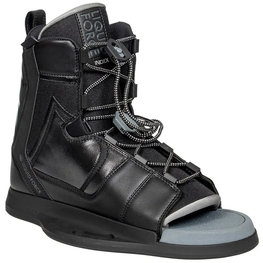 In stock
•••••
Article code 21183280
The Rant is tiny but mighty and designed to give your grom all the comfort and support needed to have fun and progress on the water. 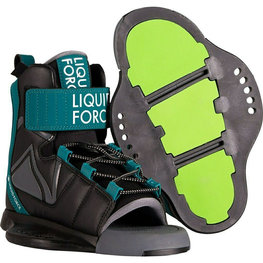 In stock
•••••
Article code 21183276
The Liquid Force RDX Wakeboard has everything you need for a wild ride behind the boat. Its progressive 3 stage rocker profile delivers tons of speed, precision, and pop off the wake, with quad molded-in fins. 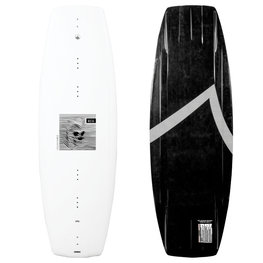 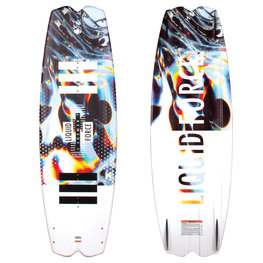 In stock
•••••
Article code 21183274
The Rhyme features a single concave with quad molded-in fins that are fused into LF’s exclusive flex tip technology giving this board ultimate response, rebound, and increased board feel with minimal drag. 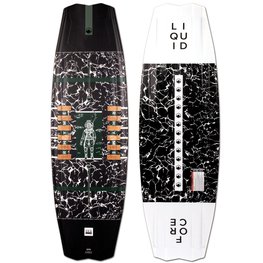 In stock
•••••
Article code 21183277
Ready to upgrade your ride? Strap into the Liquid Force LTD Transit Wakeboard Bindings once you've mastered the fundamentals for a supportive ride that'll help guide you through some new tricks. 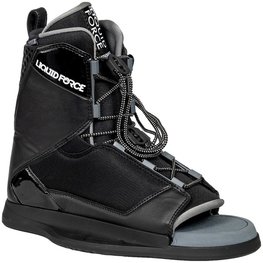 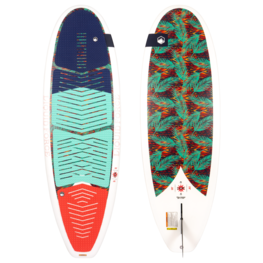 In stock
•••••
Article code 22190518
With a full, round shape and quad fin set up, this board is stable yet snappy and maneuverable. 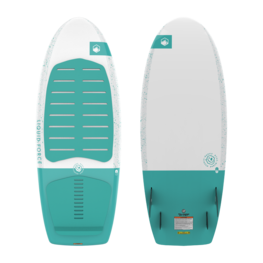 In stock
•••••
Article code 22190508
The Index is a great binding for all skill levels, but an excellent choice for riders who are just starting out. 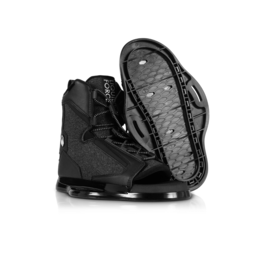 In stock
•••••
Article code 22190505
For the high level rider looking for the ultimate in lightweight performance, as well as some “user friendly” features to help with figuring out first time tricks! 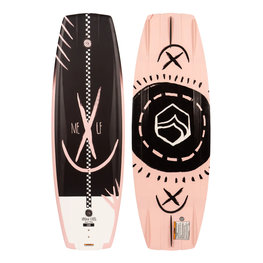 In stock
•••••
Article code 22190516
Step on the Liquid Force POD Wakesurf Board if you want to slash and splash like an expert. 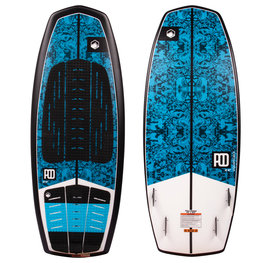 In stock
•••••
Article code 22190511
The Rant is tiny, but mighty!! Designed to give your grom all the comfort and support needed to have fun out on the water. 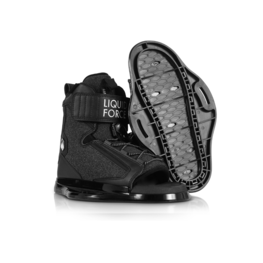 In stock
•••••
Article code 22190500
A purpose built board with a lower profile and extra core strength, designed to be loose and fast and to cut through chop and fly up any monster wake! 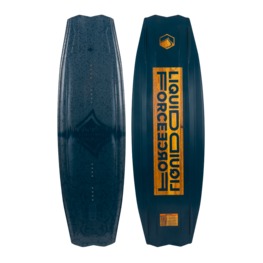 In stock
•••••
Article code 22190506
Another brand new boot design for 2022, we bring you the Scan 6X OT. The top Velcro "Power Strap" allows you to dial in the exact amount of support specific to your riding. 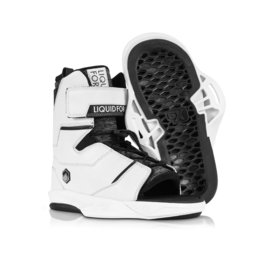 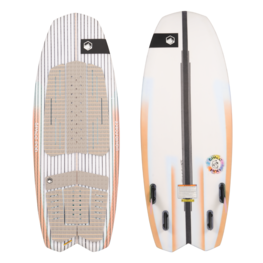 In stock
•••••
Article code 22190514
This single concave hull board features a large wing, or break, just at the base of the side fins creating a distinctive pivot point. 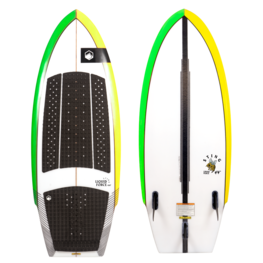 In stock
•••••
Article code 22190498
The flexible upper allows for tweaked out presses on rail and plenty of mobility for the average rider. 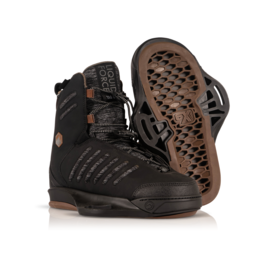 In stock
•••••
Article code 22190507
The Liquid Force Trip Wakeboard is a classic and versatile board that returns with a fuller tip shape for more energy than ever. 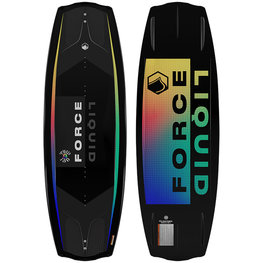 FAITH, STOKE & A LOT OF FORCE:

THE STORY OF LIQUID FORCE

Back in 1985, two great minds thought alike. They were the minds of Southern California native Tony Finn and Texas native Jimmy Redmon, who separately and simultaneously thought along the same wave length to create the foundation for what would eventually evolve into a globally renowned sport.

Looking for alternatives to waterskiing and surfing, the two created waterboards that could essentially “surf” the wake behind a boat. Finn’s model, the “Skurfer,” was shaped very similar to a surfboard; Redmon's water ski board produced by his Redline Designs was a bit lighter and the first to have foot straps.

The two met by chance when they were placed in adjacent booths at a trade show—the first time they would see their personalities complement one another.

Finn’s energetic personality as a natural salesman attracted much interest to his product. Redmon, a more soft-spoken designer, had a better product, but a less aggressive sales approach.

Tony observed Jimmy talking to a buyer for several minutes—making no progress in a sale. He strolled over to the booth and whispered to Jimmy “Are you gonna close this guy or what?” “What’s close?” Jimmy asked. Finn looked at him and said, “Ask the guy for his money.” Jimmy did, a sale was made, and a competitive friendship was born. The two acknowledge that in the beginning they were competitors, but it was a friendly competition and to this day they are aware and complimentary of each other’s strengths. As they sit recounting the history of how they came to be business partners it is almost as if each is as much an advocate for the other’s skills as they are for themselves, if not more.

In 1988 Redmon founded the World Wakeboard Association (WWA), a governing body for the sport known then as “ski-boarding,” which created several contests and affiliations as well as outlined rules and guidelines for the sport. Finn acted as an announcer for several of the contests and the two continued to cross paths.

In 1991 Finn and Redmon joined forces and started Waketech. They gathered a roster of riders that pioneered the style of the sport. Although board models continued to evolve, there were still inefficiencies with the design of the Skurfer, mainly its buoyancy and surfboard shape that made it difficult for riders to initially stand up on the board. Redmon’s original design was a bit better and lighter, however, it lacked proper durability, and was unable to withstand the beating riders put on it when competing.

In 1993, after much research, testing, and innovation, they produced the first twin-tip board, which would change the sport forever.

The twin-tip design ended up being a total game-changer. They put three of their team riders on twin-tip boards for the championship while everyone else was still riding pointed tip boards, and they won the whole thing. At that moment Finn and Redmon recall seeing the sport change before their eyes and they knew it was never going to be the same.

In 1995 Finn and Redmon—challenged by a dare that they couldn’t launch a company by the time of the World Championships only three weeks away—created Liquid Force, a company that the two say was “launched on stoke, faith, and a lot of energy.” The pair hustled to get boards made, and outfitted their riders in Liquid Force branded gear. When they showed up to the contest, they were able to get people stoked on this mirage of a brand that barely even existed. It was risky, but it was successful, and there and then the Liquid Force brand was born.

To this day, Liquid Force continues to reflect its name as a strong force in the wakeboard community. They work closely with their athletes to achieve the right designs, and their constant innovation has driven them to stay one of the leading manufacturers in the wakeboard and wakesurf markets, and most recently, the foil market! With a new home base in Carlsbad, California, the brand is staying close to its roots and continues to pour all of it’s energy into growing the sport and keeping the fun alive!

Tony and Jimmy are genuinely passionate about their journey and how it led to the success that Liquid Force has had for 25+ years… it is evident in their excitement and expression when they tell their story. From competitors to collaborators, they both have watched their ideas foster a successful brand and a successful sport, and even to this day Jimmy continues to be an integral part of pushing the brand and sport forward!