Out of stock
•••••
Article code 21180135
From Ace Disc Golf, a first class affordable disc golf starter set. The Ace 3 Pack is all you need to begin playing disc golf! 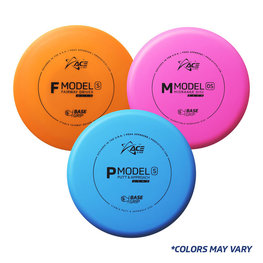 Prodigy Disc was founded by World Champion disc golfers who strive to inject innovation into the sport. Our original mission was to develop a more consistent range of “golf discs”. We set out to create and produce discs that would offer longer flight and improved accuracy amongst players of all skill levels and throwing power.

In 2013, after 2 years of successful testing, Prodigy Disc introduced a line of discs to the harshest critics - the highest ranked players in the world. The feedback was overwhelmingly positive, and we have since surpassed what we originally set out to do. Prodigy Disc now produces a popular and diverse selection of discs from Distance Drivers to Putt & Approach discs that allow players to perform their best on every shot, and in every situation. We now sponsor over 150 players, including some of the highest ranked players in the world.

Prodigy Disc has continued to push the boundaries of what defines a modern disc golf manufacturer, expanding into forward-thinking equipment, accessories, events and course design. We offer high-quality, innovative disc golf targets, bags, and accessories alongside our discs. Our latest venture, Prodigy Apparel, has utilized athlete insights in collaboration with seasoned sportswear designers to create performance apparel engineered specifically to the technical needs of disc golfers.